Plans for a National Monument to the iconic Spitfire aircraft, have taken an exciting step forward following a Government pledge to invest £3m in the Southampton project.

Supporters of the National Spitfire Project expressed delight at the welcome news of significant investment that will help turn their plans into reality. Designed by Nick Hancock, the monument’s stunning design will see a 1.5 times full-scale replica of the Spitfire soaring into the sky over Southampton water. The clever use of technology will make the monument an interactive experience bringing history to life for all who visit it.

The National Spitfire Project charity is led by local Councillor, John Hannides, who has championed the cause for many years. Located on the waterfront in Southampton’s famous Mayflower Park, the monument will be seen by visitors entering via the busy cruise terminals as well as tourists visiting the historic city.

Talking about the news, Chairman of the National Spitfire Project, John Hannides, says “This is great news for Southampton and the nation, in this, the year of the 80th anniversary of the Battle of Britain. We are delighted to receive Government support and we now look forward to raising the funds to make the nation’s first tribute to the Spitfire a reality. This monument will be a tribute to the brave men and women who designed, built, flew and maintained the world’s most iconic aircraft. A stunning landmark, it will embody the spirit of the Spitfire, symbolising courage, innovation, engineering excellence and freedom.”

Talking about the delivery of the project, long-standing supporter Jamie Barrett of Evolution5 commented “When we were approached in 2015 to manage the delivery of the project, we were excited at what the Spitfire monument would mean to the city and the nation. I’m delighted by the news and look forward to the day we see the completed monument reaching into the skies over Southampton.”

You can find out more about the plans for the monument in this brochure.

What is a Development Manager and why do I need one? To the uninitiated, the property development world can seem daunting and more than...

How to produce an Order of Cost Estimate

Producing an OCE for an initial Development Appraisal or to determine Site Residual Value In this article, we looked at how effective cost management... 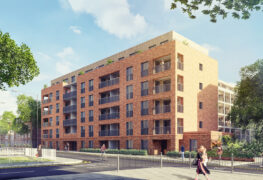 A robust development appraisal holds the key to a financially successful property development project. In this article we explain why it's so important and...

Evolution5 care deeply about our clients and we appreciate the importance of supporting you through both good and challenging times. The Coronavirus outbreak is...